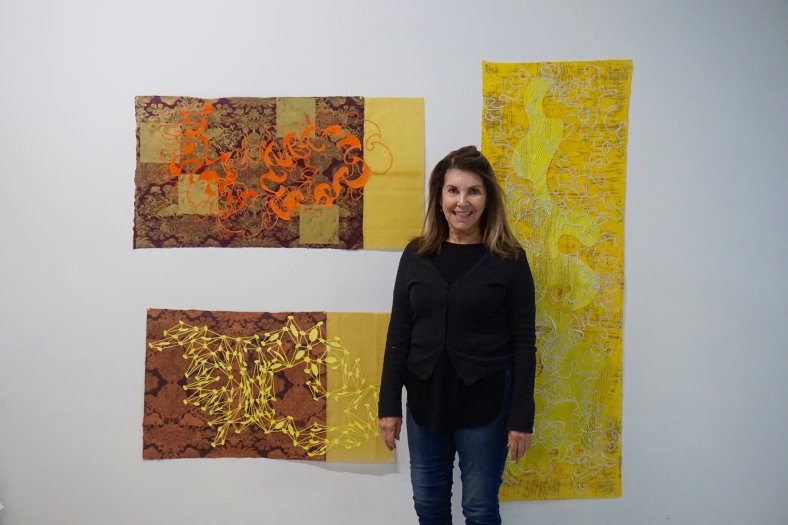 Omaha-based painter, paper and installation artist, Susan Knight is a native of Michigan.  Her work has been exhibited in solo and group shows and installations nationally, including Bank of America Headquarters, Charlotte, NC, Johnson and Johnson Headquarters, New Brunswick, New Jersey, and Garrison Art Center, Garrison, New York.  Internationally she has shown in China, Ireland, Italy, and Canada.  She has twice been featured in Sci Art in America Online Magazine.  Her work appears in Illuminations Poems Inspired by Science by Robert Louis Chianese and in 2016 was reviewed by Sculpture Magazine and Smithsonian Online Magazine.

Among her honors, Knight is a recipient of a Nebraska Arts Council Individual Artist Fellowship.  In 2013 she was chosen by The Colorado Art Ranch and The Nature Conservancy for a “Land/Water” residency at Carpenter Ranch, Hayden, CO and was awarded artist residencies at Ragdale, Lake Forest, Illinois in 1997 and 2009 and at the International School of Art, Montecastello di Vibio, Italy, in 1999.  She earned a BFA in art from Saint Mary's College, Notre Dame, Indiana, and attended The University of Notre Dame, The Glassell School of Art, Houston, and The School of the Chicago Art Institute.